Abbey Road is the name that the famous musical group The Beatles gave to their twelfth album. Among many of the songs published, there are two of the great songs of guitarist George Harrison: “Something” and “Here comes the sun”. But what is Abbey Road really? Well, neither more nor less than a London street, the one that appears on the cover of the album with the members of the group crossing a zebra crossing. And in fact, thousands of fans and followers travel to London and move to this mythical pedestrian crossing to get the famous photo. 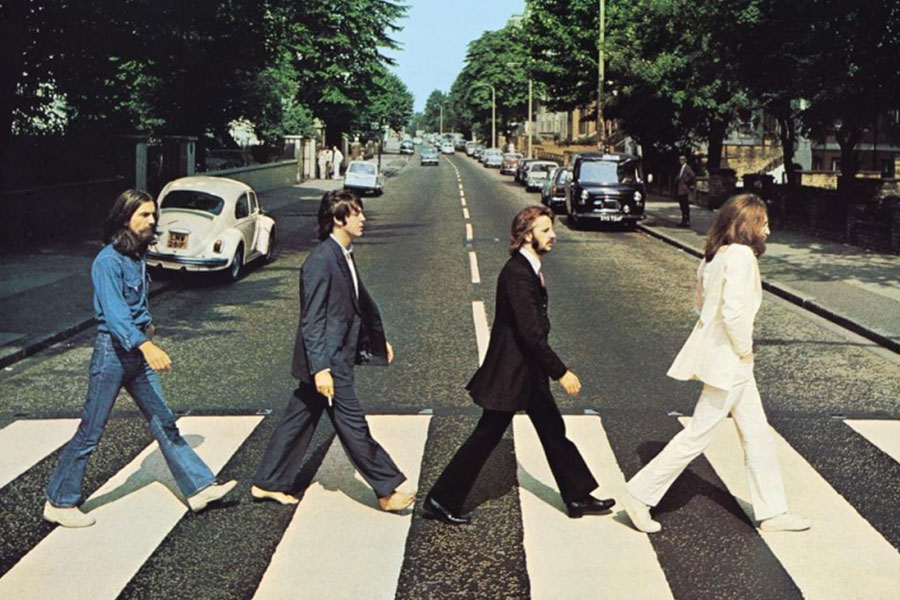 In this article we give you all the information you need to visit the zebra crossing that The Beatles crossed in London for the cover of their Abbey Road album.

Where is the Beatles crosswalk on Abbey Road?

Where is Abbey Road in London?

You can find the Abbey Road Beatles location in St John’s Wood, in north west London. This pretty area is north west of Regent’s Park and south of Hampstead, and includes plenty of cafes, restaurants and Lord’s Cricket Ground. Although The Beatles are from Liverpool, there is no official Abbey Road Liverpool crossing.

How to reach Beatles crosswalk on Abbey Road

How to travel to Abbey Road

The nearest station to Abbey Road is St John’s Wood Tube station, which is on the Northern line. When you exit the station, head west along Grove End Road for around 500m and turn right onto Abbey Road. You’ll find the studios and the crossing just after this junction. Alternatively, take the 139 or 189 buses, which stop along the road. Please note: Abbey Road DLR station is in east London, therefore it is not near Abbey Road in north west London.

What to see in Abbey Road: How to plan your visit

Many are the visitors who come here to take a photo. But many others are also those who get lost along the way trying to find the correct pedestrian crossing. And it is not so easy to find this scenario. First of all, don’t be fooled by the tube map, as the Abbey Road stop is very far (10 km) from the point you are interested in. And secondly, do not be guided by people who are lost, you may end up like them. You follow our instructions and there will be no problem. From there, you must go down Groove End Road until you reach the intersection where the pedestrian crossing is. It is not more than 300 meters. There you will find a monolith from which you will get the exact angle to take the photo of Abbey Road. In fact it is the place from which Iain Macmillan made it. So, once there, stand on the zebra crossing and shoot. Remember that if there are four of you and you really want to simulate the original photograph, Paul McCartney was third in line and, moreover, barefoot. You will find signed signs in the area, as well as some of the walls. Signatures, names, messages, fragments of the songs… And although it may seem like a romantic gesture, it is something that bothers the neighbors, so don’t participate in it.

As we have said, in this street is the record label and the studios where the famous album was recorded: Abbey Road Studios. As it is an active studio, you cannot visit it inside as a museum, but since you are in the area, you can well approach this place. The facade of the building is permanently daubed with everything that the fans want to put on it and, for this reason, it is painted periodically every eight months. In this case, although you want to leave your mark, you won’t be frowned upon at all, since those of the record company have already assumed to be a musical mausoleum for fans.

If you are an unconditional fan of the British band, you will be pleased to know that if you go down Groove End and head towards Circus Rd at the junction, you will arrive at Cavendish Avenue, number seven of which belongs to Sir Paul McCartney. You might be lucky and see him going in or out.

What is Abbey Road Pedestrian Crossing famous for?

On August 8, 1969, the four members of The Beatles – Paul McCartney, John Lennon, George Harrison and Ringo Starr – spent 10 minutes crossing this zebra crossing for a photo session that produced their album cover. Abbey Road was the title of the group’s last joint album, so it was decided that the cover photo had to be on that street. In fact, the image is symbolic in itself. The four members are crossing the road and walking away from the studio and record label of their latest album, by way of farewell. It must be said that it only took six shots from the photographer to get the final photograph. And luckily, because the police only cut off traffic for those exact ten minutes. And everything went well.

Is it worth visiting the Abbey Road zebra crossing?

The Beatles may not be one of your favorite musical groups, but that zebra crossing is the best known in the world, and for that alone it is worth going. Six white stripes painted on the floor have never created such a stir among the international public. In fact, there is no way to quantify how many people come and take pictures at this point, obviously, but it is said that the figure is approximately 150,000 people.

“This London zebra crossing is no castle or cathedral but, thanks to The Beatles and a 10-minute photoshoot one August morning in 1969, it has just as strong a claim as any to be seen as part of our heritage.” John Penrose, Minister for Tourism, when it was declared a National Landmark.

(“This intersection is neither a castle nor a cathedral, but thanks to The Beatles and a 10-minute photo shoot one morning in August 1969, it has as much right to be part of our heritage as any other monument.”) This area of London is well worth a visit, with its stately-looking houses and tree-lined streets, with its huge Regent’s Park and some hidden country atmosphere. And this pedestrian crossing, don’t miss it, because, as you can see, it is an essential visit to the city.

If you want to tour the corners of London that every fan of The Beatles should know, then we recommend that you consider making a reservation for one of the best guided tours of London by The Beatles. Some of the Beatles Tours are quite cheap, about 15 Pounds per person and they simply tour the Abbey Road area and others are quite an experience and even take you to Liverpool and back to London on the same day! Some of the best rated Beatles Tours are:

Near Abbey Road: Exploring the area