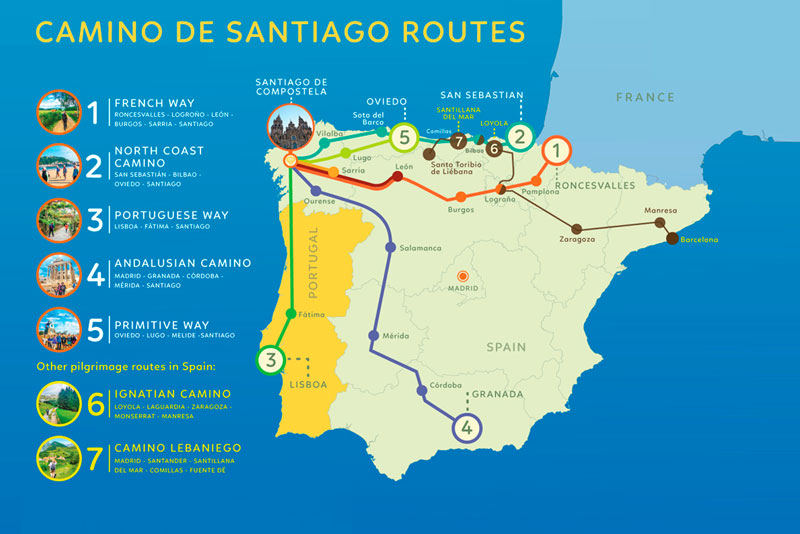 Created at the beginning of the 9th century, the pilgrimage to Compostela is one of the largest and most famous walks in Europe. The pilgrimage routes, approximately 1,500 kilometers long to Santiago de Compostela, meet on a well-known route: the “Camino Francés“. Declared the “first cultural route” by the Council of Europe in 1987, the pilgrimage routes have enjoyed renewed interest and growing attendance since the 1990s. Camino Francés (or the French Way) is certainly the most popular travel option, with over 60 percent of pilgrims following this route. The Camino Francés starts from Saint-Jean-Pied-de-Port on the French side of the Pyrenees, and crosses sizable mountains (check weather), open plains and lush hills on its way to Santiago de Compostela. A religious procession, the pilgrimage is also a moment of exchange, sharing, an ecological and inexpensive mode of travel, a spiritual journey inviting meditation and to poetry, to recharge your batteries and find yourself, a hike to reconnect with nature and/or with yourself. Do you want to make the pilgrimage to Santiago de Compostela? We tell you everything about this hike.

What is the shortest Camino de Santiago Route

The shortest Camino walk is the route known as the Camino Ingles, in Northern Galicia. The Camino Ingles has, in fact, two official starting points: the port-cities of A Coruña and Ferrol, located 75km and 113kms away from Santiago, respectively.

One of the most outstanding is the section that separates the municipality of Sarría to Santiago de Compostela. It is part of the French Way and is one of the busiest and most popular. This route has five different stages and the duration of the journey is approximately one day for each stage. It is a good alternative if it is your first time and you do not want to travel alone, or you have little time to make the trip.

The longest Camino walk route is Via de la Plata which is almost 1,000km (621 miles), this is the longest Camino de Santiago route in Spain. This variant takes you into vast landscapes and to the traces of the ancient Romans.

Which Camino route is the most beautiful?

To find the origin of the Camino de Santiago, you have to go back to the time of Jesus Christ and stop at the figure of one of his disciples: Santiago. We know from the Bible that he is a native of Galilee, son of Zebedee and Salome and that he was known as “the son of Thunder” because of his strong character. He was one of the closest followers of Jesus, whom he would accompany in the most important moments of his life. At the death of Jesus, like the rest of the Apostles, he would dedicate his life to preaching and spreading the Gospel throughout the world, reaching the lands of Hispania. Little is known for sure about his journey through the Iberian Peninsula, but tradition has it that he reached the land of Gallaecia, present-day Galicia. After hard work he returned to Palestine in 44 AD, where King Herod Agrippa I would order his death. Santiago thus becomes the first Apostle to die for the Christian faith. With the death of Santiago el Mayor, a great adventure begins that would end up shaping what is now Santiago de Compostela. And, of course, one of the most important ancient routes on the planet: the Camino de Santiago.

Transfer of the body of the Apostle Santiago to Iria Flavia

Disobeying the king’s order to bury Santiago, his disciples Theodore and Athanasius decided to pick up his body and flee in a stone boat. The three traveled without a rudder or sail, subject to the designs of the Saint until they reached the north coast of Gallaecia and went up the Ulla River. It is what in the Jacobean tradition is known as Translatio, which is recreated every December 31 in the Cathedral of Santiago. Iria Flavia would be his destination, mooring the boat to a stone milestone known as the ‘Pedrón’, which today can be seen in the church of Santiago de Padrón. Here would begin a new adventure for the disciples of the Apostle: that of burying the body of Santiago. Iria Flavia was then governed by Queen Lupa, a pagan ruler who subjected Teodoro and Atanasio to harsh tests before granting permission to bury the Apostle Santiago. The best known is that of the oxen that the disciples of Santiago ask the queen to be able to transport the body. To prevent her plans, Lupa left them some wild oxen. But before the prayers of Theodore and Athanasius, the animals became docile and allowed the body of the Apostle to be moved. Legend has it that it is the oxen themselves that finally decide the burial place of Santiago. It would be in an area near the fountain where they stopped to drink and that today is preserved in Rúa do Franco in Santiago, just 100 meters from the Cathedral and Plaza del Obradoiro. Faced with this miracle, Queen Lupa would convert to Christianity and provide a tomb for the Apostle. It is what we know as the Marmaric Ark, which was left in the care of the disciples of Jesus. Upon her death, her bodies were buried alongside those of her lord and the tomb was forgotten for centuries.

Pelayo and the Campus Stellae

Eight centuries would have to pass for the remains of the Apostle to be rediscovered. The person responsible was Pelayo, a humble hermit who lived on Mount Libredón. It was the year 823 (IX century) when Pelayo began to see some luminous flashes in the sky and how some stars pointed to a specific place. After seeing the phenomenon several nights, the hermit decided to leave his cave and ran to tell Teodomiro, bishop of Iria Flavia. Such was Pelayo’s insistence that the bishop decided to verify the stellar phenomenon with his own eyes. Both decided to approach the place and discovered a hidden sarcophagus with three bodies. Bishop Teodomiro immediately realized that they had just found the tomb of the Apostle.

Given the importance of the discovery, Teodomiro decides to travel to Oviedo, capital of the kingdom, and tell the monarch Alfonso II, the Chaste. The king is aware of the importance of the discovery and decides to go personally to see it. Thus, King Alfonso II becomes the first pilgrim in history. And his route between Oviedo and the tomb of the Apostle, on the first Jacobean Route, which we know today as the Primitive Way. The monarch himself will order the construction of a temple to house the remains of the Apostle and that is worth visiting by other Christian monarchs. This will be the beginning of what is today the Cathedral of Santiago and the formation of the ‘Campus Stellae’, the current Santiago de Compostela.

Importance of the Camino de Santiago

Many more followed this first pilgrimage from Oviedo to Santiago. The news spread like wildfire, not only in what we now know as Spanish territory, but throughout Europe. The Christian monarchs thus began their pilgrimage to Santiago. First through what is now called the Camino del Norte, a route that ran through the entire north of the peninsula and avoided the territories conquered by Muslims.

As the Reconquest progressed, the most popular route began to be the one that began its steps in Spanish territory in Roncesvalles or Jaca. We are talking about the Camino Frances de Santiago, which the monk Aymeric Picaud immortalized in the famous Codex Calixtinus in the 12th century. It is an original travel guide that details the stages of the French Way, accommodation, monuments… Over time, other routes of the Camino de Santiago emerged throughout Europe and the entire Peninsula. You can see the main pilgrimage routes as they pass through Spain in our web section dedicated to Los Caminos. The Camino de Santiago is not a single itinerary that directs our steps to the tomb of the Apostle. Over the centuries, it has become a path of civilization and cultural, artistic and social development throughout Europe. For this reason, the Camino de Santiago was declared a World Heritage Site as well as becoming the first European Cultural Route.

Preparing for the Compostela pilgrimage

Like any trip, the pilgrimage to Compostela requires a minimum of preparation. Which card(s) to choose so as not to get lost and travel unnecessary kilometers, how to find accommodation along the route – in a hotel, with locals or camping in a tent? -, how to listen to the body’s signs of fatigue (blisters on the feet, hunger and thirst, physical fatigue)?

When to do the Camino de Santiago?

The Camino de Santiago, in any of its variants, basically passes through rural areas. Hence, the most common recommendation is to do the Camino in spring or summer , when the weather is drier. In winter, not only can temperatures be very low, but at certain points we can find snow, ice and fog that make walking difficult or even impossible. Autumn is a very beautiful time at many points along the Camino, due to the change in color of the leaves of the trees, which means that walking through wooded areas fills us with even mystical feelings in view of the beauty that surrounds us. However, we must bear in mind that it is also a very rainy season in many of the points of the Way, rains that form mud that make our march difficult —very much, sometimes. Undoubtedly, the most recommended time of year is spring since the weather is very pleasant, the days are long and, in addition, we can avoid the overcrowding of pilgrims that is common in the summer months.

How to make the pilgrimage?

Be aware that not everyone takes the Camino de Santiago on foot. Many do it by mountain bike, which allows for days of 50 to 90 km covered. Others do it on horseback, which is yet another way to enjoy the course.

What to take in your backpack?

Think first about your back and your ability to walk with weight on you. Do not burden yourself unnecessarily and take only the bare necessities: you are on a pilgrimage, everyone will be dressed like you. In your backpack, give priority to:

Deciding which Way to follow should be based on reflection on the following aspects:

It may be that there is a Jacobean association in your region or city. We offer a list of Brotherhoods and Associations on the following pages. There they could also guide you in all the questions or doubts you may have. In this sense, on this website you can find complete information about the following Way:

Stages of the pilgrimage to Compostela

By always having the map of the stages nearby, you will know in which city to stay, which is ideal for booking accommodation in advance.

Where to sleep on the Camino de Santiago?

Again, it all depends on how you approach the journey. Are you a real pilgrim at heart? If so, you must obtain a Credencial available from associations. Compulsory to stay in accommodation open to pilgrims, necessary to differentiate yourself from the rest of the tourists and useful for your memories, the Credancial – or creancial – is a document synonymous with a “pilgrim’s passport”. Formerly issued by the religious authorities to safely cross the controls along the roads to Galicia, it is nowadays a document allowing access to the lodgings and accommodation that you will find along the Spanish roads. The creancial costs about 10 €. If, however, you want a little comfort after long days of walking, prefer youth hostels, lodges, and small hotels present at different stages. To help you, don’t hesitate to read our article “Where to stay along the Compostela pilgrimage?“.