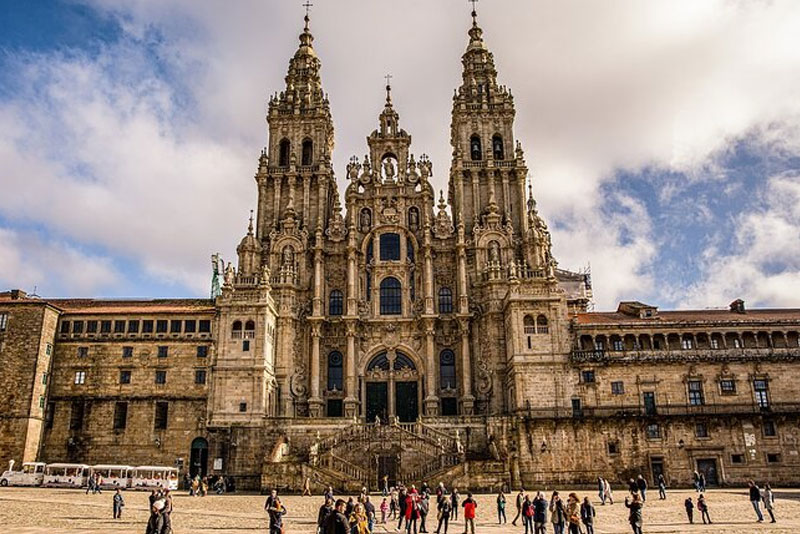 Visit Santiago de Compostela: what are the best things to do and see in the capital of Galicia, particularly known for its pilgrimage?

The name of Santiago de Compostela is known to all to be that of the famous Catholic pilgrimage whose city marks the end of the route. This city which shelters the tomb of the apostle Saint-Jacques the Greater in front of which the pilgrims come to meditate has thousand and one other richnesses related to its history and its culture.

We necessarily begin our visit to Santiago de Compostela by the Place do Obradoiro which leads us to the cathedral. This impressive monument is the must-see of your stay. Built from 1075, it has undergone several phases of work and enlargements which offer a mixture of styles ranging from Romanesque to neoclassical through Baroque and Gothic. Take the time to observe the facade of the Obradoiro, the portico of Glory or the high altar.

Piazza do Obradorio has the particularity of showing the facades of four monuments of different styles: the cathedral and its baroque facade, the Hotel of the Catholic Kings for the Renaissance, the Palace of Raxoi in a neoclassical style and finally the college of San Jeronimo for the Gothic!

A walk in the historic center

Listed as a UNESCO World Heritage Site, the old town is well worth a visit. Take the time to stroll through its charming arcaded streets and its many squares where it is pleasant to rest for a moment. On your way you will also find beautiful parks like the Bonoval or Alameda and its famous statues called “Dos Marias”.

A real jewel of Baroque art containing some treasures for lovers of beautiful objects. It is one of the major monasteries in the region, erected in the 17th century and extending over more than 20,000m²! The monastery has very beautiful gardens but also a church whose work on the facade is worth a look, as is the altar you will find inside.

Museums paying tribute to the culture of Galicia

Need we remind you, Galician culture is honored in Santiago de Compostela! There are also several museums dedicated to this theme such as the City of Culture of Galicia but also the Museum of the Galician People. The first, more remote, is a resolutely contemporary building whose aim is to promote the regional language and culture. The second highlights the heritage of Galicia and has a magnificent spiral staircase from the 13th century.

A seafood tasting is a must!

Among the visits of the city there is a passage just as obligatory as the cathedral and other historical monuments: gastronomy! You cannot leave Santiago de Compostela without having done justice to the region’s seafood specialities. Garlic octopus or Galician octopus is a safe choice.

Here is a list of some additional places to continue visiting Santiago de Compostela:

Things to do around Santiago de Compostela

You now know what to do in Santiago de Compostela, but what about its surroundings? Here are some suggestions:

How to get to Santiago de Compostela?

Many pilgrims choose each year to go to Santiago de Compostela on foot, following the paths of Compostela. But it is also possible to get there by plane (with direct flights from Paris) or by car and train. If you are Planning for Camino de Santiago Please check our Article, which will help you to plan your Pilgrimage.

Where to stay in Santiago de Compostela?