Information about stage 6 through Somport: Stage from Monreal to Puente la Reina-Gares 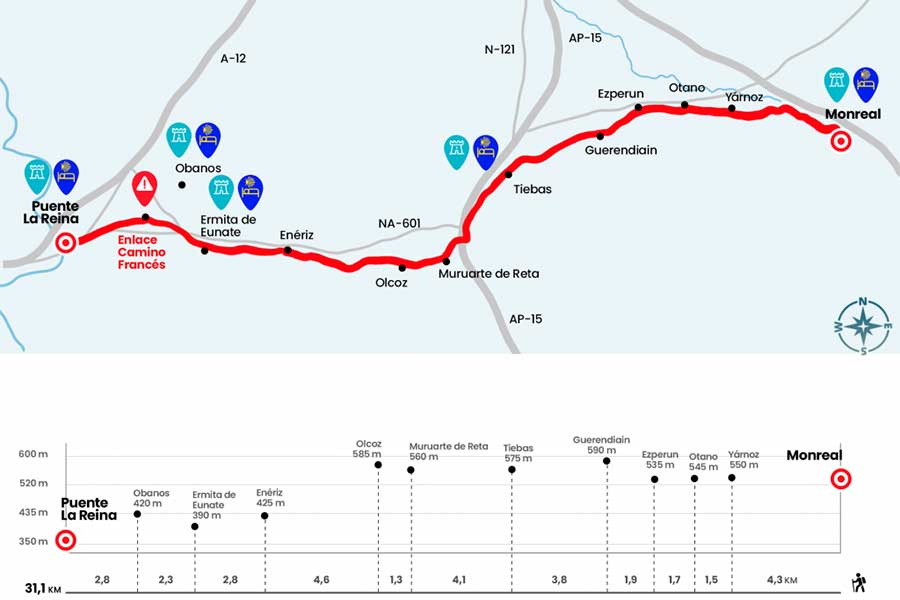 Notice : THERE IS NO LONGER A PILGRIM SHELTER next to the hermitage of Santa María de Eunate.

From the Monreal hostel, we head out through the alley and, after the church, we turn left onto Calle del Burgo to leave the town. Once in the open field we advance straight. The A-21 motorway is on our right and the cereal fields, the gallery forest of the Elorz river and La Higa , watching us from its 1288 meters, on our left. The path seeks the fertile banks of the river and, after following its course for a kilometer, it crosses it and turns left along a track (Km 2.2) . Soon, the track becomes a path that clings to the slopes of the Sierra de Alaiz . The path leads next to Yárnoz .

The last kilometer traveled is a preview of what comes next. The path fits as best it can to the changing orography of the sierra. Also, as soon as it opens into the valley as it enters the Mediterranean forest. In this way we passed next to Otano .

Half an hour later we arrive at the unpopulated area of Ezperun (Km 7.5) , where the only thing visible is the exploitation of a quarry and the Navarra canal , a hydraulic infrastructure that distributes regulated water from the Itoiz reservoir throughout the province. On a steep slope, we continue along a paved track that passes under the quarry and we descend along a beautiful sheltered path that takes us to the entrance of Guerendiáin .

Leaving this town, with its monumental houses adorned with geraniums and decorated with multiple Jacobean references, we say goodbye to the Elorz Valley . A long ‘leg-breaking’ and technical section leads us to Tiebas and its ruined castle from the 13th century.

We cross the town, leaving aside the church of Santa Eufemia . After the soccer field, we take a path that runs parallel to the fence that delimits the AP-15 motorway. When we reach a connecting roundabout, we cross a tunnel under the motorway to later avoid the N-121 road. Later, through another small tunnel, this time under the train tracks, we arrive at Muruarte de Reta .

Pay attention to the signs, because before reaching the first houses you have to turn left along the paved road. Following this local road we arrive at Olcoz and with it the Valdizarbe region . As an interest, a resident of Olcoz offers guided visits to the lineage tower , rehabilitated in 2012. It has four floors and dates from the fourteenth and fifteenth centuries. Inside is the permanent exhibition ‘Eunate-Olcoz: Keys to the Camino de Santiago. The Navarrese treasure of the first Renaissance of the 12th century’ .

At the entrance to the town we continue to the right to shortly take a path that descends a hill and from which we get good views of the region and the Navarra canal. Following a small paved section and a track later we arrive at Enériz , a good place also to please a parched throat and an empty stomach.

We continue along the track until a milestone forces us to turn right between the bushes. A good stratagem to stoke the suspense, since behind the gallery the silhouette of Santa María de Eunate is discovered. Romanesque hermitage, with an octagonal plan and surrounded by an archway, whose originality has earned it a good reputation on the Camino de Santiago. The hostel attached to the hermitage left its hospital function in autumn 2012 and since 2013 the house has hosted activities of the Muruzábal parish group (Km 26) . One kilometer from Eunate we cross the road to go up to Obanos. In the Plaza de los Fueros of this town, next to the church of San Juan Bautista , our itinerary merges with that of the pilgrims who left, for the most part, from San Jean Pied de Port or Roncesvalles.

After a line of pilgrims much larger than usual, we left Obanos and went down to the road, which we crossed to take a path parallel to the Robo river. . Shortly we reach the shoulder of the N-111 and the entrance to Puente la Reina . The 31.1 km of this hard stage are covered in the center of the town.

The two “jewels” of today’s stage are the Romanesque hermitage of Santa Maria de Eunate and the Romanesque bridge over the Arga river in Puente la Reina . Between Eunate and Puente la Reina there is a signposted detour to go directly to the latter town without going through Obanos . only about 200 meters are saved, but it is more pleasant. One kilometer after Eunate we arrive at the junction of the N-6064, the official path crosses said road, but we continue along the shoulder of it for a kilometer and a half where we take a signposted path on the left, we cross the Robo river over a bridge and after another kilometer and a half we turn right to enter Puente la Reina at the height of the hostel of the Padres Reparadores. In the town of Obanos the French and Aragonese roads meet, there is a monument in the shape of a pilgrim before entering Puente la Reina with the following inscription, “And from here all the Roads to Santiago become one” .

What to see, what to do