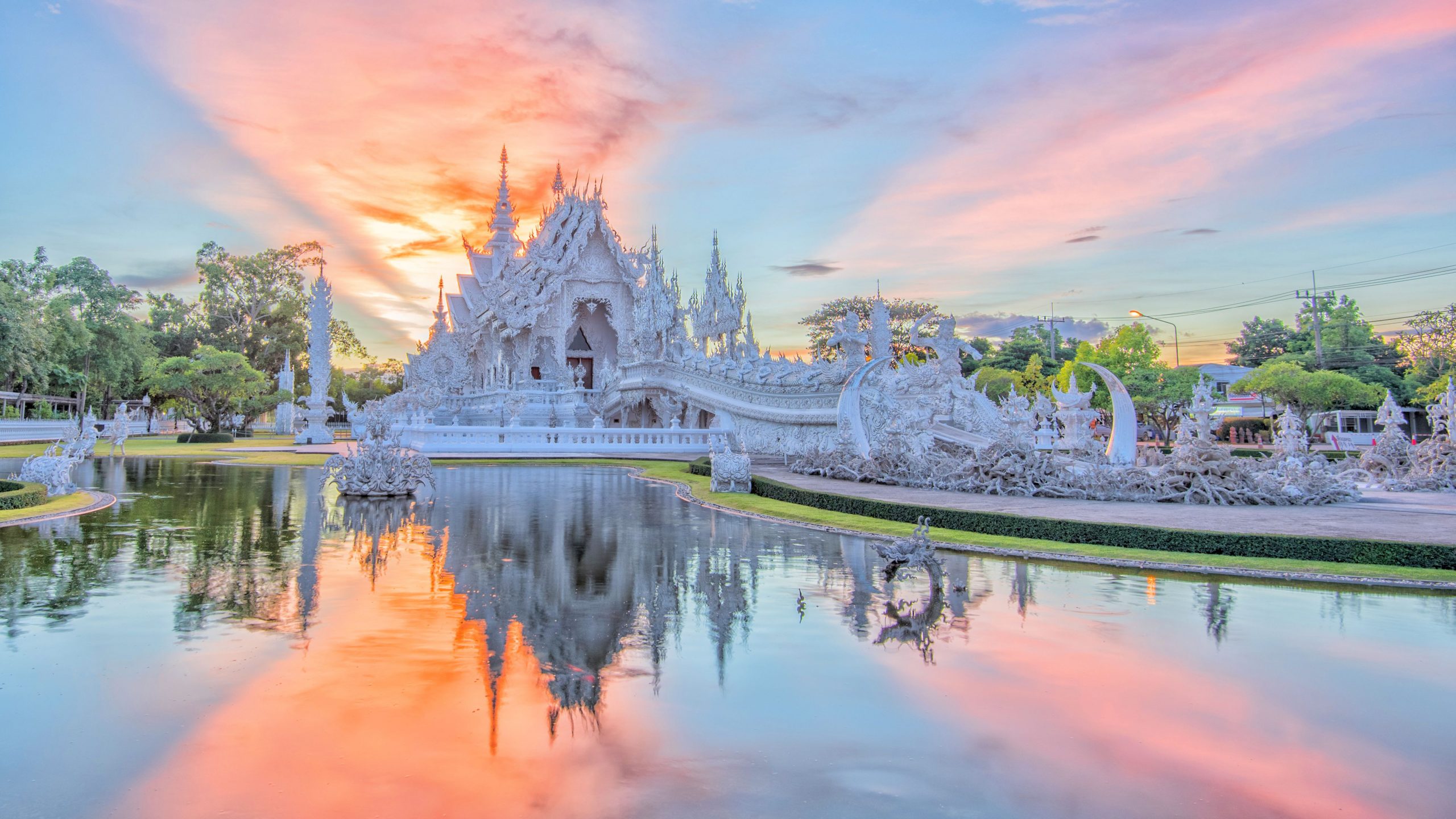 One of the best options is Chiang Rai, the second most important northern city, which is home to some of the rarest treasures you will find on your trip. Are you planning to go there and don’t know where to start planning your visit? Don’t worry: here you have 9 things to see and do in Chiang Rai

Is Chiang Rai worth visiting? 100% yes! This Thai city is hugely underrated. Being the northernmost city in Thailand, it is often overlooked in favor of other places like the digital nomad hub of Chiang Mai and the hippy town of Pai City.

What to see and do in Chiang Rai

The White Temple or Wat Rong Khun is one of the wonders to visit in Thailand and one of the most beautiful places to see in Chiang Rai.

This modern temple, its construction began in 1996 and is still going on, impresses with its architecture and originality, which have made it a unique space in the world as well as one of the most visited places in the country, so if you are going to To visit it, something important is to arrive first thing in the morning or last thing, if you want to make the visit without many people.

Some of the most outstanding elements of this temple, completely painted white, are the lake in front, which on sunny days completely reflects the image of the temple, the Bridge of Reincarnation, the Gate of Heaven, the Ubusot, which is the central part, and the house of Gold.

Considered by many to be an unconventional place, this Buddhist and Hindu temple is surprising for the mix of traditional style with the most surreal, in which even mosaics in which comics appear and current events.

In addition to the temple itself, it is worth taking a walk around to see several structures and sculptures that maintain the style of the creator of the White Temple, such as the original toilets, which are located in a yellow building, and the museum.

The Wat Rong Suea Ten (Blue Temple), is next to the White Temple, our favorite temple in the city and another of the essential places to visit in Chiang Rai. This original temple, dedicated to the cult of Buddha, surprises with the intense blue color that predominates throughout the building and that makes it another unique temple. Although construction began in 2005, the temple was not opened to the public until 2016 and soon became one of the most visited temples and a draw for tourists looking for the perfect photo to share.

Its most impressive place is the central building or Ubosot, decorated down to the smallest detail with paintings and sculptures and which houses a 6-meter-high white Buddha, to which is added the upright white Buddha, located at the back of the temple.

Other highlights of the enclosure are the two huge sculptures called Nagas that protect the entrance, a platform that serves as a lookout to the left of the entrance and the original fountain located in front of the temple.

Keep in mind that it is a very popular temple among tourists and locals, so if you want to visit or take a photo with no one, it is best to go at dawn or after 7 in the afternoon, when practically no one is there.

Going through the Night Market in search of some original souvenir and trying the local food in one of its stalls is, without a doubt, one of the best things to do in Chiang Rai.

In this Night Bazaar, much smaller than the one in Chiang Mai, you can find authentic handicrafts made by the northern tribes and comfortable clothes that will help you make the country’s hot climate bearable. After shopping, we recommend going to a large square where a food court with shared tables is set up to try local delicacies and listen to live music.

On weekends, the night market extends to some of the main streets of the city.

Another 15 kilometers from the city, but in the other direction from the White Temple, is the Black House ( Baan dum Museum ), a complex of different buildings and temples characteristic for the dark color of their wood and for more rare elements (also here !) that decorate both the interior of buildings and gardens. Many believe that the Black House is a metaphor for death (either because of the predominant black color throughout the enclosure, which is not very cheerful, or because of the hundreds of animal remains that are distributed in each corner) and although its creator, the artist Thawan Duchanee, has never confirmed it… the feeling you have after the visit is not one of peace and joy.

We honestly left with mixed feelings. On the one hand, it is undeniable that the place is amazing (in total there are more than 40 buildings!) but on the other hand, seeing so many skins, bones and remains of animals makes you cringe. Of course, if you like curious places and you are a bit of a geek, you are going to enjoy it! How not to do it in front of the construction that looks like a spaceship?

Located on a hill, about 9 kilometers from the city, is Wat Huay Pla Kung, another of the places to visit in Chiang Rai. This spiritual complex is made up of a typical Chinese 9-storey pagoda, a temple with a certain resemblance to the White Temple and a huge white Buddha figure almost 90 meters high. It is also allowed to go up by elevator to the top of the Buddha to enjoy fantastic panoramic views of the entire environment and the city.

To get to Wat Huay Pla Kung you can take a Grab for about 150THB or a bus at the bus station for 50THB per person.

One of the best things to do in Chiang Rai is to try the delicious typical food of northern Thailand in one of its most recommended restaurants. During our 4 days in the city we tried several restaurants and their most typical dishes, which confirmed the fame that this city has of being one of the places where you can eat the best in Thailand.
We leave you a list of our favorite restaurants from the city:

A 70-year-old Thai dressed as a cowboy dancing to aerobics music? Yes gentlemen, this is Thailand! Clothes stalls, pinchitos, handicrafts, fruit juices, dance floors, thousands and thousands of Thais wanting to party: if you visit Chiang Rai during the weekend, don’t miss the Weekend Market.

The Clock Tower, the work of the creator of the White Temple Chalermchai Kositpipat, is another of the places to see in Chiang Rai. This golden monument, located in the middle of a central roundabout, has become over time the icon of the city, which we recommend you take a look at.

We recommend going to the tower at 7pm, 8pm or 9pm, to see the small light and sound show that takes place at these times.

Explore the surroundings of Chiang Rai

There are a few excursions near Chiang Rai that might interest you: there are, for example, that travel to the mythical Golden Triangle (where you can see Laos, Thailand and Burma at a glance, although more than this it is famous for having been the epicenter of… the opium war :-p). Or the one that leads to the characteristic Chinese town of Mae Salong. And a good idea is to rent a scooter and explore the surroundings.

There are also a few trekking options (if hitting the mountains is your thing) although our favorite excursion is still… Chiang Mai (and we recommend you not to miss it!).

Where to stay in Chiang Rai?

we stayed at the Huen Chan Thip hotel for €18 a night, a small and charming hotel with an indoor pool and buffet breakfast. It is about 15 minutes from the night market, in a quiet area of the city. Recommendable.

How to get to Chiang Rai by bus?

Recently they have built a new bus terminal (Terminal 2) and, for routes to other cities, it is the one that has been used. The station near the market has been left only for local buses.

How to get around Chiang Rai?

Both the White Temple and the Museum are 30 minutes from the city, but in opposite directions. To get to them you can do it by public transport , with the buses that leave from the Old Bus Station, either sharing a songthaew or negotiating a taxi to go to both places. This is what we did and for 4 people we paid 600 Bahts (about €15), it took about 4 hours in total. Another excellent idea is to rent a scooter for a day for around 150-250 baht (€4-6).

How many days to be in Chiang Rai?

The ideal would be to stay 2 days (1 night). Enough time to get to know the essentials of the city.